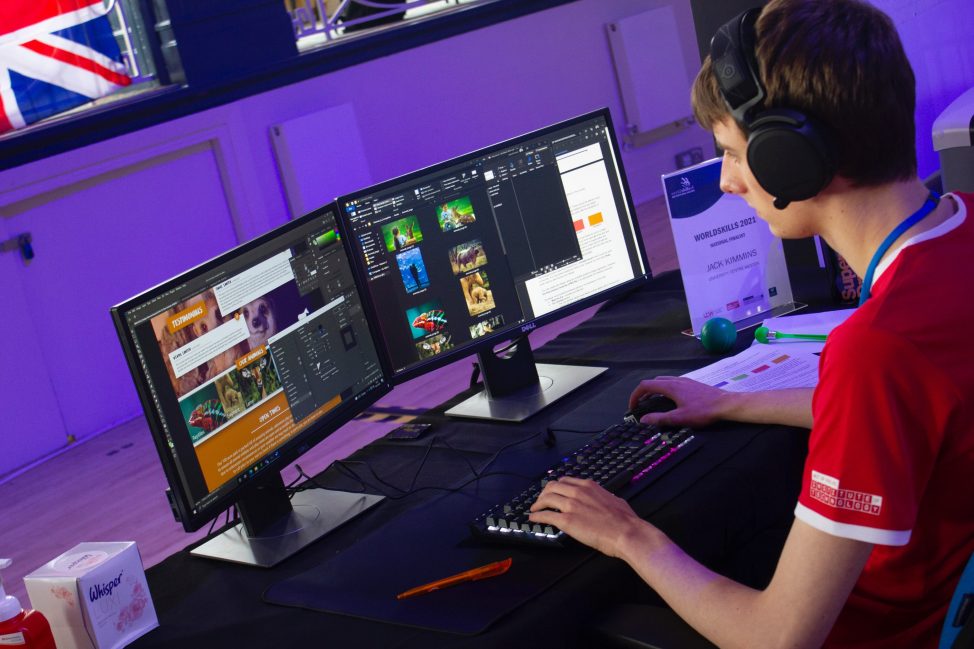 University Centre Weston (UCW) computing learner, Jack Kimmins, will be representing the UK after recently being announced as the gold medal winner at the national WorldSkills Web Design finals.

WorldSkills UK is an independent charity that works with employers, education and governments, supporting young people across the world via competitions-based training, testing their ability to achieve world-class standards in the biennial ‘skills Olympics’.

Over 3,000 learners registered to take part in the UK-wide competitions in March 2021 and Jack was just one of four hundred who made it into the finals, which was split into 64 disciplines.

The Web Design category finals, hosted by the Weston College Group at The Winter Gardens in Weston-super-Mare, was between nine competitors from across the country and took place over two days. The finalists were tasked with building a website, employing their skills of html, JavaScript and front/back-end coding to bring the detailed brief to fruition. The final products were then anonymously judged by a panel of digital experts from renown organisation Jisc, Airbus and the UK Hydrographic Office.

After the challenging finals were completed, the winners were announced at a virtual ceremony hosted by TV presenter Steph McGovern from her Channel 4 “Packed Lunch” studio on Friday 26 November. It was here that Jack was announced as the national gold medallist. Also Level 3 Apprentice Luke Merchant a Weston College student was named as the Silver medallist in the Automotive Technology finals.

Currently in his third year, Jack is studying Applied Computing BSc (Hons); a course provided through the West of England Institute of Technology.

Jack commented: “I feel very proud, I was really shocked when my name was read out! My web development knowledge has grown throughout doing this project as well as my time management skills.

“The finals were a really memorable occasion and I’m looking forward to training for the next stage.”

Learners that achieve the gold medals at the national finals then get invited to join the UK WorldSkills Squad. Not dissimilar to Team GB for the Olympics, the gold medallists will be then go on to compete in the international finals which will take place in France in 2022.

Jack continues: “I will be now representing the country in the field of Web Design. I feel very prod doing so and I’m going to try my absolute hardest.

“The staff at UCW have helped me immeasurably. I’d like to thank my tutor Jason Hill for all his hard work and help. I’d recommend everyone gives it a go and tries to push themselves with this opportunity.”

Weston College Group Principal and Chief Executive, Dr Paul Phillips CBE added: “Many congratulations to all of our WorldSkills winners. I am so proud of all of you, representing our college and confirming your amazing talents. We wish Jack the very best of luck with the international stages, it truly is a fantastic achievement.”

Deputy CEO of WorldSkills UK, Ben Blackledge, says that success in UK-wide finals is a litmus test for the future of the economy.

“These young people are a real inspiration. They are an example to us all and are to be congratulated. To have excelled after such a difficult year shows their dedication and drive is second to none.

We use cookies on our website to give you the most relevant experience by remembering your preferences and repeat visits. By clicking “Accept All”, you consent to the use of ALL the cookies. However, you may visit "Cookie Settings" to provide a controlled consent.
Cookie SettingsAccept All
Manage consent

This website uses cookies to improve your experience while you navigate through the website. Out of these, the cookies that are categorized as necessary are stored on your browser as they are essential for the working of basic functionalities of the website. We also use third-party cookies that help us analyze and understand how you use this website. These cookies will be stored in your browser only with your consent. You also have the option to opt-out of these cookies. But opting out of some of these cookies may affect your browsing experience.
Necessary Always Enabled
Necessary cookies are absolutely essential for the website to function properly. These cookies ensure basic functionalities and security features of the website, anonymously.
Functional
Functional cookies help to perform certain functionalities like sharing the content of the website on social media platforms, collect feedbacks, and other third-party features.
Performance
Performance cookies are used to understand and analyze the key performance indexes of the website which helps in delivering a better user experience for the visitors.
Analytics
Analytical cookies are used to understand how visitors interact with the website. These cookies help provide information on metrics the number of visitors, bounce rate, traffic source, etc.
Advertisement
Advertisement cookies are used to provide visitors with relevant ads and marketing campaigns. These cookies track visitors across websites and collect information to provide customized ads.
Others
Other uncategorized cookies are those that are being analyzed and have not been classified into a category as yet.
SAVE & ACCEPT
Powered by